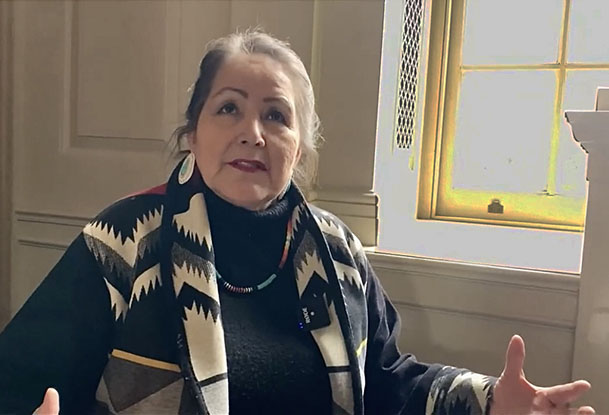 Diane Schenandoah Her name is “Tekahnatshyali:te,” which in her language means, “She Brings the Dawn.” Diane Schenandoah is Oneida, of the Haudenosaunee (Iroquois) confederacy. She shines her healing light as a sculptor, writer, teacher, singer.

Reared on Oneida Indian Territory in upstate New York, Diane was first inspired by her artist mother Maisie Shenandoah, who was Wolf Clan Mother of the Oneida people.  “My mother collected ancient Haudenosaunee artifacts and encouraged us children to be creative as she taught us how to make rattles, baskets, corn husk dolls, do beadwork, and so on.”  Diane was to express her art spirit from that time on, fully realizing her gift as a sculptor while attending the Institute of American Art in Santa Fe, where she received degrees in fine arts and creative writing.

In the creation of her art pieces she uses natural materials offered to us by Creator. “I shape clay from mother earth, or chisel stone, marble and bone.  I often carve sculptures from the bone of deer, buffalo or caribou. Working with Mother Earth gives me a certain closeness beyond the art piece. It’s a grand feeling knowing that the ancestors before have passed through this clay.”  This connection to the earth gives her strength and inspiration.

Diane says, “I enjoy combining several of the natural elements into one sculpture.”

This use of a variety of natural materials can be clearly seen in Calling All of Creation, one of her museum pieces which depicts two Haudenosaunee men facing each other on a bench as they beat their turtle rattles in a sacred form of song. The sculpture is fashioned from Ohio clay and mounted on a black walnut base. The rattles are made of buffalo horn, the feathers of the gustoay (ceremonial hat) are composed of carved Quahog shells and wild turkey feathers. 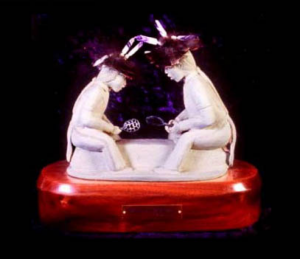 Diane Schenandoah is Faith Keeper of the Wolf Clan of the Oneida nation. The title is Kaié:ri niioríwake Iakoteríhonton.  It is her role to promote the traditions of the people, uphold Haudenosaunee culture and language, and serve as a spiritual advisor. Faith Keepers are well versed in the history of their people so that they can continue to share it with future generations. Expressing the spiritual significance of the work is paramount to her. “Every sculpture must depict something meaningful from my culture and reflect the spiritual realities of my people. For example, my Utah alabaster stone bear entitled, “Transformation” represents how the bear becomes one with a bear clan person, who then becomes cloaked with the healing power and medicines of bear.”

Through her art the artist shares Haudenosaunee legends and the importance to the people of social, spiritual and emotional harmony. One of most powerful legends tells of the commitment to peace among the different nations of the Iroquois confederacy – the Mohawk, Oneida, Onondaga, Seneca, Cayuga.

Somewhere between the years 1200 and 1400 AD, after a long period of warring among the tribes, three prominent leaders joined to change this pattern: Aionwatha (Hiawatha), Jigonhsasee (female leader – the first clan mother – Mother of Nations), and Peacemaker instilled a tradition of peace amongst the tribes.  They went to beseech, through acts of open-hearted kindness, an alliance with a powerful and violent chief, Tadadaho.  He ended up “seeing the light” and joined them. The four met at the sacred White Pine, the “Tree of Peace,” where among it sroots all weapons of war were buried.  This event was to mark the beginning of a tradition of peace and democracy that has prevailed for centuries amongst the Iroquois, and became an inspiration to the founders of the USA.

Diane celebrates this precious and powerful legend in her sculpture, Haudenosaunee Call for Peace in which:  Eagle carries our prayers to the creator. The face on the front is Tadadaho. The open-hearted offering of kindness to him is signified by a hand which removed of the snakes of torment from his hair. The front band around the hand represents the 5 nations of the confederacy, and along the back of the piece is Jigonhsasee, spreading the messages of peace throughout the four directions.

Wampum have been offered by the Haudenausaunee people to document treaties made between groups since the time of the Great Peace.  The Haudenosaunee see the Two Row Wampum (Guswenta) as a living treaty for two groups to live in peace and to respect the ways of the other as they meet to discuss solutions to the issues that come before them. Diane’s art piece is of Caribou antler on a base of Maple wood of the region.

Haudenosaunee society is based on a matriarchal order.  Women are held in high regard and have supreme authority in decision making regarding issues involving land, food, and selection of chiefs.  The majority of the artist’s works portray women in some way.  A significant body of the artist’s work is of mothers and babies – she is a mother of five herself.

For thirty years she has performed with her dear sister, Joanne Shenandoah, harmonizing with the beloved songstress through voice, rattles and drum.

“When Joanne recorded her Sisters CD the record company serendipitiously found an image of my art piece, Sisters, and said to Joanne:  ‘We found the perfect image for your cover!’  She was surprised and thrilled that it was my piece.”

Diane sums up her view of her gift as an artist, “My goal is to reach out to people everywhere and share the beauty of Indian life and culture, and to give them hope through my art work and teachings.” She has shared her wisdom far and wide.  At present she does energy work and spiritual counseling at Syracuse University as Honwadiyenawa’sek – ‘one who helps them’.  “I share as much as possible of the Haudenosaunee culture and teachings, and tell how we arrived at being people of peace.  I guide students in healing techniques such as hands-on energy work, art therapy, the use of tuning forks, acupressure, dream interpretation and ceremony to best enable them to be in a state to express gratitude and promote the use of a good mind.”