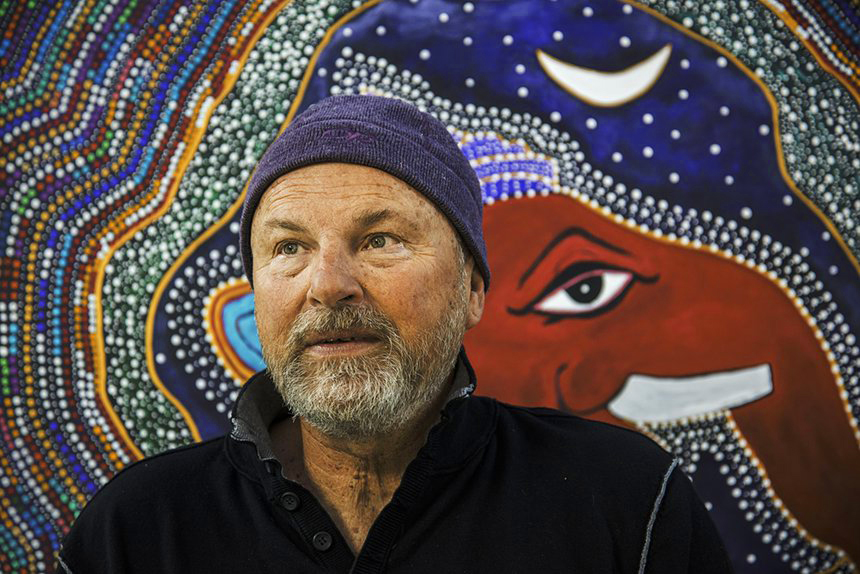 James F. Jereb, PhD, is a self-taught, visionary artist who works in paint, print and stone and is the creator of Stardreaming, Temples of the Cosmos, a 22-acre sacred stone temple labyrinth complex for the new millennium located in Santa Fe, New Mexico. He has lectured widely at conferences in Bali, Bosnia, Egypt, India and elsewhere on his visionary art and Stardreaming.

Art is a link to Source – Infinity Consciousness. The transformative potential in all of us allows art to be a path of self-knowledge and self-transcendence.

I believe my paintings, writings and architectural structures reflect the viewer’s own spiritual worlds of wonder and magic back at them. My creations serve to raise consciousness so that we can recognize the divine within and create a better world for us all.

Many of my images are sacred archetypes of various religions and mythologies based on personal visions and inner quests.

I hope my creations awaken the divine child within you. Each individual’s awakening will open our hearts and minds to allow us to realize the Oneness of all things visible and invisible. I hope my paintings act as portals of universal understanding of healing and transformation for all that experience them.

One of my greatest achievements in print are the publication of my three books, “Spirit Magic Light: A Visionary Meditation for Enlightenment,” “Alchemy of the Stone: Journey of a Visionary Alchemist” and “Quest of the Golden Dolphin in the Land of Stardreaming.”

My early career as an art historian/museum educator provided me with the opportunity to travel globally and to develop a multi-cultural connection with peoples and a deep appreciation of their unique world views. I became an admirer and collector of indigenous world art and crafts, but never saw myself as an artist.

In early 1996, I experienced an extraordinary awakening and began accessing guidance from various Shining Ones, or Masters, from the higher realms of consciousness. Being afraid and confused at first, I followed instructions. Guidance from Spirit was clear, compassionate and simple: I was to surrender to the Creative Source, paint on large canvas, open stargates and build temples which have become the foundation of my work and my life.

The Star Temple was the first environment I created based on this guidance. It was the location of my first transformative visions and led me to create the Masters of the Stargates. I painted ten stargates on the floor that expanded the energy of the space. These stargates, combined with ten 10-foot cactus, were configured to replicate the Tree of Life grid. This grid acted as a multidimensional portal for activation, healing and personal transformation. 22 images in total comprise the Doorways to the Stargates and Masters of the Stargates which later became the images for the oracle deck called “The Stargate Deck: Transformative Images for Heightened Awareness.”

In 2000, when I left the Star Temple, I painted the walls black. All the energy from the Star Temple was transferred to the current site of Stardreaming and anchored in stone. I collectively refer to this body of sacred architecture as the Temples of the Cosmos. Stardreaming has become a place where I continue to paint on canvas and write about the universal, alchemical transformations that take place within and around me for others to enjoy and use to awaken within themselves.

One of the miracles at Stardreaming, which would take years to embody, would be moving and aligning tons of stone with a trusted crow bar and steel pipe forming sacred geometrical configurations. In addition I chipped 50 tons of stone by hand to open the memories of the stone and the alchemical fire within. This alone makes the Temples of the Cosmos unique and very powerful.

Stardreaming has become a center to experience old and new Magic among its sacred landscape of stone temples and labyrinths. Now it has a new Temple, an inner sanctum called Temple of Illumination, completed January 2020. Here one can experience expansive celestial wisdom and Light (soul) Languages in an intimate setting.