The Recapitulation Chamber was first visualized in 1993 as part of an exhibition concept, near completion, titled “Living With Extinction – What is Your Choice?” It is a meditation chamber constructed of willow trees, formed after the Golden Mean Ratio, the shape of a snail. So much of life, including perhaps the shape of expending consciousness, follows this magical dimension and form, from the inner ear to whirling galaxies. The floor offers homage to the “Seven Sisters”, the Pleaides, a spiral of stars hosting for many souls a stellar home base. 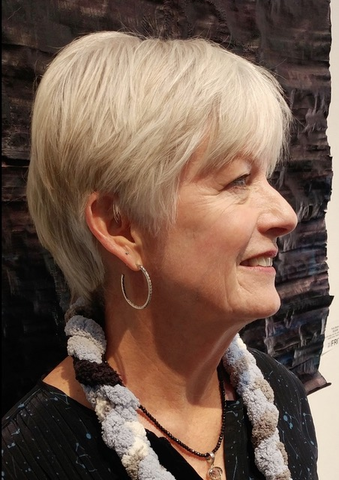 Jean’s artistic adventure began in grade school, striving to draw a better horse. She received a full oil paint set at twelve years old and studied with adults in her hometown of Oklahoma City. She experimented with every medium she could get her hands on, but mostly she drew constantly, developing a keen eye. In high school, she won many art prizes. After her mother passed away, she and her dad moved to Greensboro, NC, where she graduated high school.

As a teenager, she intuitively knew she needed to support herself by her art, and left Virginia Intermont Junior College Fine Art Department, transferring to Parsons School of Design in New York City to study Fashion Illustration. By her third semester, she had landed a job in the award winning fashion advertising department of Eaton’s Department Store in Montreal, Canada at the age of nineteen. After six months, having developed a visually powerful portfolio, she returned to New York City to further her goal to become a freelance artist in New York. By the age of twenty-two, Jean had several freelance retail and editorial accounts.

After her father passed away when she was twenty-two, Jean’s interest led her to better understand the difference between illustration and fine art. As fervently as she plumbed the depths of the art world, she was equally a seeker of truth and a spiritual path with heart. Her early twenties were about bridging what appeared as dichotomies: art and spirit, fine art and illustration, career and relationship. She relocated to upstate New York, becoming part of the established New York illustration sect as well as running a small equestrian operation.

She explored a myriad of esoteric teachings during the heyday of the human growth movement that helped her venture into the world of fine art by painting the subject she felt confident about: horses. Her equestrian work has been recognized throughout the country.

The call for bringing together art and spirit lead Jean to join with a team of people to help develop a community in Lenox, MA. Don Altshuler, whom she had met in workshops in New York, had acquired a former Westinghouse/Vanderbilt estate, called Foxhollow, and inspired a group to help fulfill a vision of a hotel and conference center, which included an art center. Jean signed on to spearhead the effort. What she developed was a ten-year project called The Farmbarns, A School for Experimentation in the Visual Arts, whose mission was to explore the realm of what was known as Transformative Art. What began as an investigation into the purpose of art in society became a regional resource for workshops and classes to better understand the power of the visual symbol in the individual, in culture, and in civilization. Between 1977 and 1987, The Farmbarns produced collaborative art events, led workshops, produced shows, hosted visiting artists, such as Allen Gussow and Jose Arguelles. Jean also served on the advisory board of the Omega Institute, where she also led art workshops for several years. Don and Jean were married in 1982.

It was during this ten-year adventure, that Jean became more coherent in her understanding of the power of fine art and its role in creating and reflecting the collective culture. It connected her nationally with like-minded artists and inspired her to work collaboratively with local artists to create events such as Alan Gussow’s LifeYards in downtown Pittsfield. The Farmbarns would culminate in the massive global event known as Harmonic Convergence, which she interpreted as a global art experiment. This venture into collaborative performance work was gratifying and educational, but it was time to get back to her own art. So, in 1988, Jean made several extended journeys to the Southwest to paint and learn sculpture.

By 1989, Jean and Don bought a second home in Pojoaque, New Mexico, and within two years, they had relocated to New Mexico. She studied sculpture in Scottsdale, AZ, and Loveland, CO, which inspired a series of equestrian bronzes over the next several years. But the horse has always led her to deeper places within her. Jean’s profound concern for the fragile environment and our future has been her chief focus through her art since the mid nineties. She states: “As an artist, there is nothing more for me to do but to create images and forms that can remind us of our place in the universe, our journey as conscious beings in relationship to all of life, and our interrelatedness to everyone and everything.