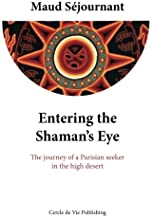 The Earth element manifests itself as a line on the horizon that is hard and creates a contrast with the sky. The earth makes our bones and flesh and gives our body a form that will go back to the soil when our time has ended. It has the dark brown colors that come from the mix of decayed organic matter and millions of years old rocks created in Fire or intense compression. All elements have a deep relation between each other whether it is of allies or enemies as we have within. What shall we choose to be with ourselves and others? 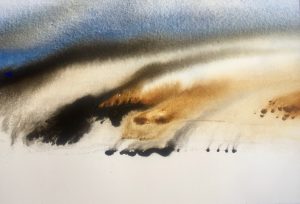 Air is the most subtle element to discern: indeed, it is inhaled every 3 seconds within our body without our conscious awareness; it is almost invisible except when it carries up earth particles. Its most prevalent form (the wind)  moves pigments, gazes, so we can become aware of this almost invisble element. I have called this painting ’The Eyes’ as you can discern a ghostly form with two eyes that seems to aspire particles from the earth.

Long Blue: This painting shows a long wave in the ocean followed by longer ones behind.   You may see also a waterfall coming down from the mountain  intensified by huge volumes released by glaciers. ; its  power is far reaching as tsunamis have demonstrated and can reach coasts beyond any human imagination. We need water every day in our body ; cannot live more than 3 days without it! If we know how to combine it wih fire, we can create the psychic steam that is the source of all human creation. 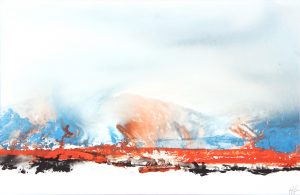 We need the power of Fire inside our body to keep us warm and make our whole organism move and transform, sublimate elements into pure energy so we can create and move mountains; fire can also attack our own  body which becomes inflamed as we see our forests and land destroyed by raging flames that cannot be stopped. Fire is our alliy if we feed him carefully so we stay in control but it can be voracious and untammable when it get the help of wind and has too much to eat; can we keep it tamed through a wise relationship? 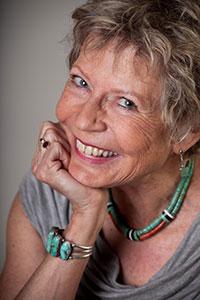 A message from Maud Séjournant

I would like to personally tell you how I got here:

French by birth, I lived in Paris for the first 25 years of my life, where I studied political science and started a career in advertising and journalism. Then a meeting with a teammate of Eric Tabarly (a renowned French sailor) took me on a great nautical adventure. We crossed the Atlantic twice on a small sailboat and we settled in the Caribbean, where we lived for 10 years, raising our two children, Flora and Axel. During the next ten years I made several trips to teach in France, Switzerland, Belgium and Canada as suggested by my mentors. Fascinated by the new communication technologies and wanting to spread our programs, in 1999 I launched the first Toltec apprenticeship program by phone and by email, to touch those who are interested in ancestral wisdom. Since the favorable reception and success of this new teaching method, I have developed further programs for professionals, particularly via personal coaching.

During a trip to Santa Fe in 1985, I discovered my deep connection to Southwest American traditions. The shock was profound: it seemed to me that I rediscovered my roots in the Native American culture, still unknown but familiar to my soul. Ecstatically, I discovered the many powerful places which exist in New Mexico. In parallel to my local contacts with men and women shamans and traditional mentors, I expanded my knowledge in the more recent developments in transpersonal psychology by thoroughly studying the new approaches to personal development emerging in the US. I always strive to incorporate the essence of wisdom teachings in daily life, transforming magic into an everyday tool to enable people to become the creators of their lives, like I did for mine. If you would like to learn more about my personal initiation, including its ups and downs, then I invite you to read my book  published in English under the title “Entering the Shaman’s Eye” available on Amazon.

I was fortunate to receive the best teaching in Christianity in a respected and well-known catholic high school. I felt a calling towards spiritual experience when I was very young. Later on, like many of us, I questioned the institution of the Church, without however rejecting the spirit of Christ’s teaching.

The Native American shamanic tradition that I discovered in Western America enabled me to express my natural curiosity and put me in a culture accustomed to non-visible worlds. That is the origin of my first book: Le Cercle de Vie, published by Nouvelles Clés/Albin Michel.

Thereafter, I continued with the Toltec teachings of Don Miguel Ruiz, who I met in 1989 in Santa Fe and whose advanced teachings I followed from 1997 to 2000. My mission is to be a bridge between the wisdom of ancestral traditions and our contemporary world. I led the way to getting his books published in French by Jouvence.

I also had the desire to establish links between the Toltec philosophy and Buddhism. Between 2003 and 2006,  I have spent several months per year in South East Asia in order to explore the Buddhist path beside monks and practitioners of various lineages and to meditate in sacred places.

I have since integrated these spiritual paths that echo one another and give a new meaning to each other: they are the foundations that now allow me to accompany each person in their path to reach personal freedom.

Registered for 10 years with the Counseling and Therapy Practice Board of New Mexico, USA, Maud holds a Bachelor’s degree in Transformational Psychology and a Master’s degree in Creative Expressive Therapy from Southwestern College, as well as an advanced diploma in Ericksonian hypnosis from the Milton Erickson Institute. She also received trainings in PNL, EMDR (level I et II ), and Thought Field Therapy. She has been a member of the Southwestern College board of Directors for 5 years and has shared her experience with several psychotherapist associations during professional conferences in New Mexico.

For several years, Maud has developed her practice towards coaching that accompanies people who have already advanced on the path of creating and manifesting their personal life dream. In order to be the best companion possible, she has followed a 2 year coaching training at two American institutes: the “Institute for Life coach training” and the “NewField Network”, both certified by the International Coaching Federation (ICF).

She also has training in coaching enterprises and organizations. The second “ontology coaching” training offered by the Newfield Network perfectly completes the approach she offered during 14 years by aiming to touch  individuals’ essence rather than change their behavior. She has completed more than 3000 hours of individual and group coaching.

She is also a trainer in creativity and has worked with the Chiang Mai University and other institutions in Thailand. Her website:

“Le Cercle de Vie” has been translated under the title “Entering the Shaman’s Eye” and his available on Amazon.

As a collection director at the Jouvence editions, she has introduced Don Miguel Ruiz’s toltec vision in France.

Maud is acknowledged by Don Miguel Ruiz’s Sixth Sun Foundation as an Eagle Knight Teacher in Don Miguel Ruiz’s Toltec tradition. She is the only certified French teacher in this lineage that she has introduced in France by publishing Don Miguel’s book in French. She has contributed to the sharing of these teachings  by offering programs that are adapted to our daily life, in which more than 500 individuals have participated since 1998.