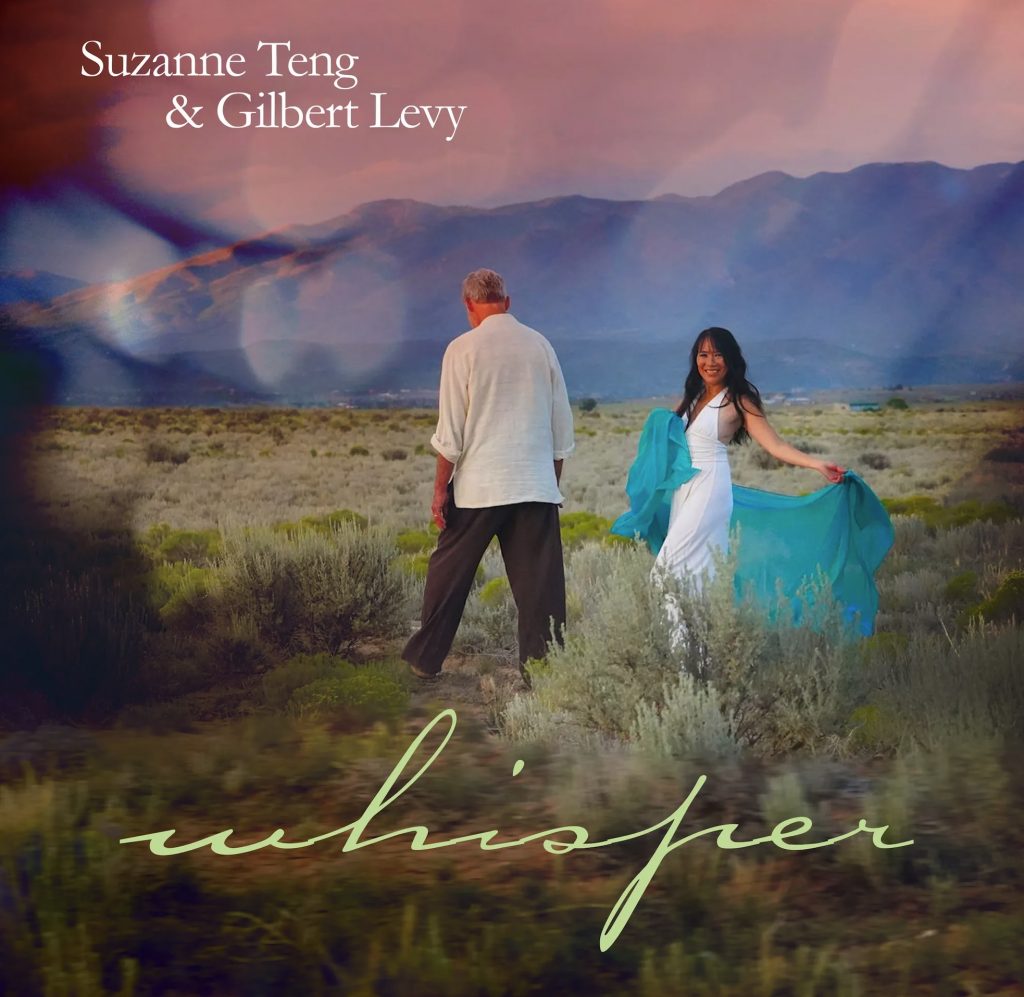 ‘Whisper’ is one of the finest works of an ambient structure to have come across my desk in a long, long while. Listen to the opening piece, the proud title track Whisper, the gentle acoustic guitar of Levy enhances the sublime soothing flute of Teng, this is one of those tracks to simply stop what you’re doing, listen, and just be in the moment with.” 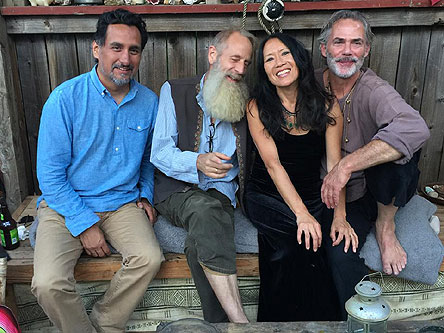 Their music has been licensed for hundreds of film, television, commercial and video productions and was featured on NBC’s America’s Got Talent.

Appreciated for its sacred, relaxing and heart opening qualities, their works have been used in numerous healing recordings, films and videos, including a special CD compilation of their music created by the pharmaceutical company Genentech that was distributed to over 50,000 cancer patients to aid in their recovery.

“Mystic Journey…lifts the listener to a place where beauty, ecstasy and tranquility reside” (Whole Life Times) both in recordings and live performances, as demonstrated in venues where they have performed such as the Dalai Lama’s International World Festival of Sacred Music, where they were featured artists each year of the festival.

Husband and wife team Teng and Levy are the primary songwriters and have released their newest album Autumn Monsoon as a duet. The 10 tracks feature Teng on Native American flutes with Levy on an array of world strings, drums and percussion.  The album is a journey through the American Southwest and with hints of India, the Saharan desert and beyond. 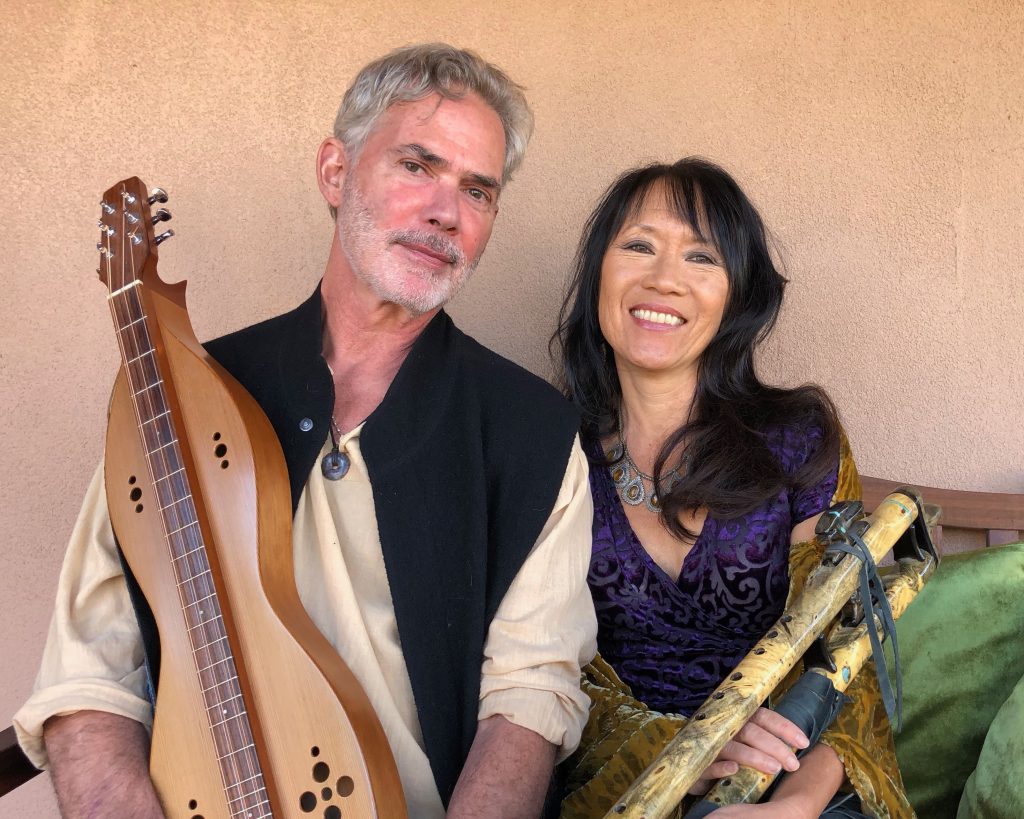 SUZANNE TENG has been described by the Los Angeles Times  as a “brilliant flutist” who “plays music for the soul.”  Originally from Berkeley, California, she received her Master’s degree in music from Boston University’s School for the Arts and, after traveling across the globe, decided to further her passion for world music, pursuing her Ph.D. in ethnomusicology at UCLA where her focus was on music and healing.

Suzanne plays an extensive array of flutes from around the world, including the Chinese dizi, bawu and hulusi, Turkish ney and zurna, Indonesian suling, panpipes, penny whistles, Native American flutes, ocarinas, the West African fulani, Egyptian reed mijwiz and Bulgarian dvoyanka.  As a western trained flutist, she is able to translate her skills to the hundreds of ethnic wind instruments in her collection, but she considers the alto flute to be her primary voice.   She is an endorsed artist for YAMAHA representing the low flutes on which she is recognized for her beautiful tone and expressive playing. Listening to Suzanne’s emotional flute lines , you can feel your heart opening, as one of her passions is to create music that is healing and transportive.  Music Connection Magazine wrote that in “Teng’s delightful flute performances…joy emanates from her soul when she plays..”

Recognized in the recording industry for her skillful and creative playing, she can be heard on hundreds of recordings on Polygram, Warner Brothers, Windham Hill, BMG, Shanachi, Sounds True, Scottie Brothers and numerous independent labels, commercial soundtracks for Kleenex, Pepsi, Dodge, Johnnie Walker,  video game soundtracks for “Myst” and “Prince of Persia,” film and television soundtracks for Emmy-winning “Tumble Leaf “(PBS), Machu Pichu (Netflix), “Miss Spider,” “Babar and the Adventures of Badou,”  “Boston Legal” and “Murder, She Wrote,” the film “300,” and numerous films and commercials for India, Germany, Korea and Mexico.  She has appeared on national television, including live performances on several of CBS’s Survivor finale shows, which were seen by over 70 million viewers.

Suzanne is also a renowned flute and world music educator who presents workshops and clinics around the world and has co-facilitated retreats in Hawaii, Bali, and Guatemala. She has been teaching since she was 14 years old and has taught at major universities, conservatories and colleges around the country, at music festivals, camps, schools and major music conventions as well as privately.  Respected in the field, she was invited to serve on the National Endowment for the Arts Music Education panel for three years.

GILBERT LEVY was born and raised in New Orleans, Gilbert began playing drums at an early age andby his late teens was performing professionally in R&B bands in clubs on Bourbon Street and with jazz greats such as Wynton and Branford Marsalis.  Levy moved to Los Angeles in his late 20’s and played pop music in numerous bands and on several major label recording projects.

His years of experience in pop/rock/jazz/R&B as well as world music give Gilbert the ability to create rhythms that are musical and music that is rhythmic. He is known for his expressive and exuberant performances both onstage and in recordings. He credits his years of North Indian classical music studies for creating his unique style. He also plays African and Middle Eastern hand percussion as well as a very unique personalized drum set and the evocative Swiss metal hand drum called the “hang” which is featured on much of their music.

Years ago, after a hand injury led him to take a break from hand drums, he started to explore stringed instruments and their newer albums feature his beautiful performances on the African bass harp (ngoni), the bass dulcimer, the Turkish saz and the Inuk, a unique hybrid guitar, on numerous tracks. He also uses his extraordinary technical expertise to engineer and mix their recordings.  Teng and Levy have created music for yoga and acupuncture DVDs and several films including  the documentaries “Raw for 30” and “Beirut Rising.”

Suzanne and Gilbert live in Santa Fe where they raise their teenage son Miles, a dog, two cats and a coop of chickens. They record their award-winning music at their home studio, Dragonfly Studios.

DANN M. TORRES is a multi-instrumentalist with an affection for acoustic experimentation and electronic manipulation. Well versed in a variety of musical styles and idioms, from world fusion to post-rock, experimental and ambient jazz, his divergent approach to sound design seeks to deconstruct genres and bring elements of them together into something that is new, compelling and unique. Dann has worked with Solace, Naked Rhythm, Shaman’s Dream, Azam Ali and a variety of other diverse musicians both in the studio and in improvised performance.  In Mystic Journey, Dann plays the oud, acoustic guitar and electric sitar. His personal works can be found at soundsArchaic.com.

JON OSSMAN grew up in New Paltz, NY, lived in New York City for many years and then moved to Los Angeles.  He calls himself “a lucky rebel who has seen most of this planet from a stage behind a bass.” Jon has recorded and toured with many of the greats such as Marc Cohn, Blood Sweat and Tears, Paula Cole and Chris Botti and also writes music for films, infomercials and videos. He plays a number of types of basses and also plays sitar and the hauntingly beautiful Indian fiddle called dilruba with skill and delicacy.

Mystic Journey invites their listeners to join them on a mystical, musical journey