As a system of universal correspondences, each of the 64 Gene Keys is an encyclopaedia of insight, information and revelation. Come and explore this amazing free interactive library of every Gene Key. Explore each Gene Key and its relationship to the I Ching, astrology, Human Design, genetics, the Codon Rings as well as its corresponding animal, bird and mineral. Additional resources from the genekeys.com shop can be integrated into your Living Library, including Gene Keys Siddha Palm Mudras and The 64 Ways Audio Collection.

If this is your first time in the Living Library take a moment to read the info below. If you are ready to explore choose a specific or random Gene Key using the Interface below. 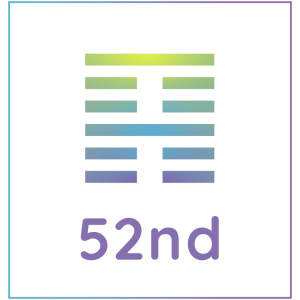 Use the tabs on the left hand side of the menu to select different perspectives of the Synthesis. You will see a similar menu on each Gene Key, providing you with a series of lenses to explore the archetype in your contemplation.

In this section, you will see the Spectrum of Frequency for each Gene Key, followed by the chapter titles from the book “Gene Keys: Embracing your Higher Purpose” available. In the Gene Key Synthesis, the vibratory rate of your aura is mirrored in three frequency ‘bands’ known as the Shadow, the Gift and the Siddhi.

The Siddhi frequency band relates to full embodiment and spiritual realisation. The very concept of frequencies and levels paradoxically dissolves when the Truth is realised as a Siddhi. The word ‘siddhi’ means ‘Divine Gift’.

The Gift frequency band relates to human genius and open-heartedness. As your awareness delves more fully into the Shadow frequencies, it unlocks latent energy held within your DNA.

The Shadow frequency band emerges from an ancient wiring in the human brain, relating to all human suffering. Such wiring is based on individual survival and is linked directly to fear. The unconscious presence of fear in our system continues to enhance our belief that we are separate from the world around us.

Buy the Book/Kindle on Amazon.com to Learn More

A chemical family within your body made up of one or more codons. There are a total of 21 Codon Rings, each one relating to a specific amino acid or stop codon. The Codon Rings are transgenetic chemical families that operate across entire gene pools, drawing certain people naturally together in pairs, groups, and ultimately forming whole societies. The Codon Rings are the biological machinery behind what the ancients called ‘karma’. The manner in which they interlock forms the geometric unified field underpinning humanity, and as human DNA mutates in order to carry the higher frequencies that are coming with the Great Change, the 21 Codon Rings will bring humanity into the biological realisation of its true nature and unity. Each Codon Ring is connected to a specific Amino Acid, chemical constituents used by your body to build proteins. There are 20 major amino acids. You have within you the power to influence the various combinations of amino acids in your body, thus building a body of radiant health and catalysing the chemical foundation for all higher states.

Read More About the Codon Rings

About the I Ching Hexagrams

The original ‘prima materia’ of the Gene Keys, the I Ching is a sacred Chinese text dating from around the 4th century BC. Many commentaries and versions of the I Ching exist and it is perhaps best known as a popular oracle. The Gene Keys are a natural culmination of all previous incarnations of the i Ching. They ultimately point to the truth that all sacred texts have their source inside us. The same truths intuitively grasped by the ancient sages can now be proven by modern genetics – that the universe is built upon natural codes and these codes can be deciphered and unlocked. The original I Ching was held in the highest esteem as a sacred text with the capacity to mirror living wisdom in every moment. Likewise the Gene Keys point us inwardly to seek the source of our suffering in our Shadows and guide us in transforming that suffering into creativity and freedom.

Read More About the IChing

About Astrology & the Gene Keys

Astrology is the student of the movements and relative positions of celestial bodies interpreted as having an influence on human affairs and the natural world. The Gene Keys Synthesis uses a holographic map of the time and place of your birth in relationship to specific archetypal codes. Each Gene Key has a position of about 5.5 degrees of the zodiacal wheel. Explore the spectrum of consciousness for each zodiac sign and see what resonates for you in your exploration of the Keys.

Read More About Astrology and the Gene Keys

Programming Partners are two Gene Keys that are holographically bonded together through opposition – in other words, they are exact mirror opposites. There are 32 such programming partners within the genetic matrix, and each creates a biofeedback loop that reinforces the themes of those Gene Keys at every level of frequency. At the Shadow frequency, the programming partners create physical, emotional and mental patterns and complexes that mutually reinforce each other. As awareness penetrates these patterns and transforms them, they release waves of creative energy at the Gift frequency, which in turn are mutually reinforced, leading to a continual raising of one’s evolutionary frequency. At the Siddhic frequency, the programming partners no longer oppose each other but dawn as pure consciousness, creating a harmonic so pure that it deletes their difference.

Integral Human Design (IHD) is a synthesis of many approaches. The key elements are the Gene Keys, Human Design, the Integral Approach, and Neuroscience. From the perspective of the form principle, it allows you to see the millions of shapes a human form can take, and supports you to let yourself and others be who we are designed to be. Learn More about Integral Human Design (c) – www.integralhumandesign.net

The Human Design System (HDS) describes the mechanics of the maya with amazing accuracy and strongly emphasizes individuality and uniqueness. It provides a calculation, which highlights specific codes from the language of life that are the cornerstones of your uniqueness. It also provides a bodygraph – a structure image of a human being, which displays these codes in comprehensible and interrelated manner.

About the Dream Arc Codex

Each human being has a unique inner pantheon of creatures that represent the deep healing processes within our psyche. These animal codes tend to surface both in our waking life and in our dreams. The Dream Arc Codex will guide you through your inner wilderness by aligning every Shadow, Gift and Siddhi of each Gene Key to a creature from the underworld, mammal and bird realms. To work with the Dream Arc system is to begin a lifetime’s journey of accessing deep core visionary information from the collective unconscious. It is an intuitive knowledge that is consistently unveiled through dreams and altered states.

About the Siddha Palm Mudras

The Siddha Palm teachings connect the ancient science of mudras – sacred hand positions – to the Gene Keys. Through the 64 hand positions you can directly access the highest essence of each Gene Key – known as its Siddhi. This extremely potent form of hand yoga bypasses the mind and sets up biogenetic resonance in the subtle fields surrounding our body. Using the Siddha Palm techniques, your hands become a tuning fork for any specific frequency, whether it be Stillness, Ecstasy, Forgiveness or any other Gene Key. You can also practise any of the mudras relating to your Profile, as well as moving through magical sequences which can shift your inner state instantly, bringing balance, health and heightened awareness. Purchase of this online course provides streaming access to all 64 mudra videos. Choose a mudra, perform it every day for a week and you will see a miracle growing before your very eyes…

About the 64 Ways Audio Collection

The 64 Ways are potent oral transmissions of each Gene Key recorded by Richard Rudd. Offering a different perspective from the Gene Keys book, these audios are spoken in a simple, contemplative style and blend practical advice drawn from Richard’s life, as well as poetic insight and gentle humour to probe the depths and dilemmas of the Gene Keys.

By purchasing the full audio collection, you will see access to the each Gene Key audio file inside the Living Library.

Please note that the Living Library is still being updated and a new version is currently in development. Thank you for your patience and support.